Mission Statement: The Ellington’s Board of Directors is the steward of the assets and interests of the Owner’s Association. As such, the board makes decisions which result in a facility that is well run, maintained to the highest standards, appropriately insured against risk, and able to capture maximum appreciation in the marketplace.

Mary Orvis – President
email: maryorvis@gmail.com
Mary is a residential real estate broker and works actively in the Downtown and Greater Seattle markets. She is an original owner at the Ellington and her hobbies include golf and sailing.

Mary Hsu – Member at Large
email: marylhsu@gmail.com
An original owner at Ellington since 2001,  Retired from state and local governments and UofW.  Active with non-profit boards.  Enjoys travel and learning about other cultures.

Sterling Morris – Vice President
email: smorris@cnw.com
Sterling has lived in Seattle since 1969 when he was stationed with the Navy.  He’s a retired Century Link program development manager.  The Ellington is his 4th condominium experience.

Jason Fruchter – Secretary
email: jason@aandjstudios.com
Jason is a children’s book illustrator and animator. He’s been an Ellington homeowner since 2010. As secretary, Jason publishes a monthly summary of board meetings in the Ellington Condo Association Meeting Minutes.

Doug Exworthy – Treasurer
email: exworthy@trfpac.com
Doug is a commercial real estate developer and investor based in Belltown.  His firm, TRF Pacific, owns the retail units at the Ellington.  He has served on the board since 2001.

Join the mailing list to have the Ellington Condos Newsletter sent directly to your email address every week. It’s a great way to keep up on important announcements, building events, what’s going on in the neighborhood, and more!

The fitness room is now open 24 hours a day. No individual reservations accepted. Your facility key will open the door, as before. Mask wearing is optional. Please continue to respect others and maintain social distancing.

The spa is temporarily out of order as we have a ruptured water line under the pump equipment. Updates to repairs will be provided soon. 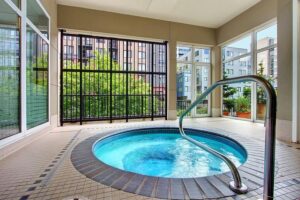 Become familiar with what to do in the event of an emergency with this guide presented by the Seattle Office of Emergency Management.

Belltown United is a neighborhood coalition that promotes inclusion and connection, embraces urban growth and celebrates our diverse culture through community building, promoting economic vitality, and advocating for the residents and businesses of Belltown.